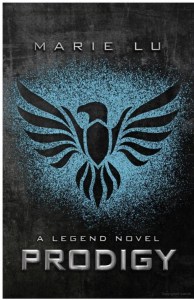 The Republic believes Day is dead. Thanks to the role June played in his escape, she is wanted for treason. Needing a safe place to hide, Day and June seek out the Patriots, a group of rebels intent on bringing down the Republic. Given little other choices, they both join up with the vigilantes and are swept up into the revolution. But no one is who they seem in the game of politics. Just who can they really trust?

A Sense of Disillusionment With the MC’s

There was a lot of telling in the beginning of the book which made it difficult for me to connect to the main characters, Day and June. My sense of disillusionment really started from page one. I simply wasn’t convinced of June’s relationship with Day and my sense of escape, what I like to call the “reader’s fantasy world”, was quickly corrupted. I didn’t feel like either June or Day were very authentic. It seemed like June was too preoccupied with silly things when she had bigger trouble to worry about. And when Day slipped into similar pettiness, I started feeling frustration at the direction both characters had been taken. Rather than growing the characters, which is what I’d expect in a sequel, it almost felt like Lu had purposely regressed their maturity levels just so she could later on make them have a growth spurt.

Thanks to a disingenuous voice that was hindered by more telling than showing in both character’s points of view, I thought both Day and June were very flat. I almost felt like I couldn’t be reading the same set of characters because I absolutely LOVED Legend. But, for whatever reason, Day’s voice was inconsistent and there were several times where I thought he sounded too much like June. As for June, she didn’t seem like the same girl from Legend, she had a pretty consistent voice, she noticed all the tiny details in a room like before, but she seemed so detached and too preoccupied with her own insecurities, which I find odd for someone who seemed so sure of herself in the previous book. While it makes sense for both characters to be experiencing post-traumatic symptoms after their ordeals in Legend, the way that this issue was explored was just subpar for me. The elements that I would have thought should be focused on, (oh like the fact that everything June has ever know is crashing down on her), were overshadowed by teen angst. Barf. I’d like to make the argument here and now that not all teens are like that, they don’t agonize over stuff like that for that long. But, maybe that’s just my faith in the teens of our day talking.

After feeling a lack of connection to the main characters, when I got to the point that Anden was introduced I started to get excited. I thought he was a more consistent character, his motivations were clear, the stakes for his situation were logical and he was just all around a very well conceived character. I actually wish that his POV was included and alternated between June and Day’s because at least he seemed to have more maturity and have his priorities in order.

A Lot of Action. Maybe too much.

A lot happens in Prodigy. There is a ton of action and a lot going on behind the scenes that would have been nice to actually get more of a perspective on. It felt like for this book, both characters were just shadows being pushed along through the story rather than being active participants. The alternating POV definitely was put to good use for this book because each chapter would end on some sort of mini cliffhanger forcing you to push through the next chapter in order to find out what happened next. This is a good thing because it definitely kept me reading despite my frustrations at some of the repetitive themes. After pushing on I was rewarded about 70% through and the book really picked up for me on many levels.

Alas, There is a Cliffhanger

Is June being the double agent just like always going to be a plot point? Is this her trope? Is she perpetually stuck doing the “trust me *wink wink*” thing? *Sigh*

So there were some repetitive plot points from Legend that I found annoying early on. However, once June and Day throw down the glove, I was finally able to connect to them, I started caring about all their angst, and I finally saw them being active participants in their stories. The last 30% of the book was vastly enjoyable for me, I was able to forgive the annoyance factor of the beginning and now, thanks to that plot twist, I am excited to know what happens next in Champion.

Discussion: When you read a book, do you ever feel frustration at why the characters are doing something or seem to be dwelling on something that you think they just need to get over and put their big kid underwear on? Which books/series/characters have made you feel this way? What would you have rather them focus on or do?

One thought on “Prodigy | Book Review”